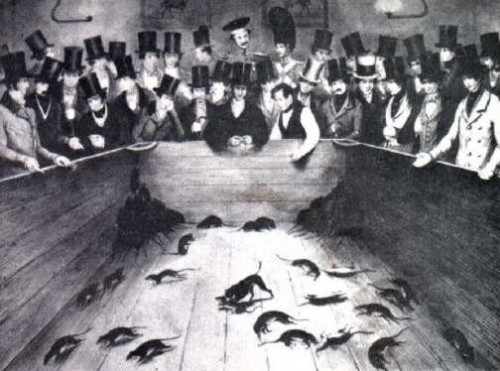 Historically known as Black and Tan Terriers, these impressive ratters pre-date the Kennel Club by at least 300 years and were one of the first breeds to be registered.  The origin of the black and tan terrier is shrouded by the mists of time; they have certainly existed since before the 1500’s when one appears in an illustrated manuscript called ‘The Hours of the Virgin’.

We have thought long and hard about the fine single coat of this ancient native breed, which has always seemed at odds with our cold wet British climate.  An explanation came one day when we visited a historical tourist attraction with a ‘medieval kitchen’ during an event where they had fired up the oven and were trying out some authentic cooking.  The heat produced was quite impressive, and a little dog living in such a place would certainly do well with the sort of coat that our dogs share with native sighthounds.  The kitchen would have been their natural environment with the rats and other vermin to keep down, and the fine coat would have harboured fewer fleas – which is always an advantage for household companions.

In the 1800’s rat baiting became a popular gambling opportunity for ‘gentlemen’ and black and tans were spectacularly good in the pits. One 5.5lb black and tan named Tiny is recorded to have regularly killed more than 100 rats in half an hour. The sport was prohibited at around the same time as the Kennel Club was formed and these same gentlemen turned to exhibiting their dogs at the first dog shows.

Originally Black and Tans were exhibited in classes divided by weight.  In the 1920’s it was decided to re-name the larger dogs as a distinct breed, the Manchester Terrier, whilst the smaller ones continued as Black and Tan Terrier (Miniature).  The name English Toy Terrier (Black and Tan) was adopted in 1960.

Large and small black and tan terriers were exported to the USA and Canada.  As in the UK the North American population was eventually split according to size, until the 1950’s when the decision was made to re-register them as a single breed with two varieties; Standard and Toy.

In recent years the Kennel Clubs on both sides of the Atlantic have begun to allow the registration of Toy Manchester Terriers as English Toy Terriers and vice versa.  This allows a valuable introduction of fresh genes into both populations.  It will be interesting to see the impact that this, and other recent Kennel Club initiatives have on this wonderful ancient breed.