Yesterday I visited London to see the “Terrier’s Tale, the Manchester Terrier through History” Exhibition at the Kennel Club Art Gallery. 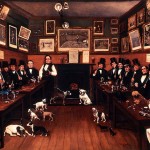 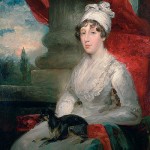 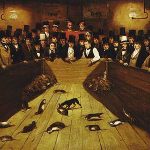 It was a little disappointing, particularly in this venue, to see some of the exhibits mislabelled, with Black and Tan Terriers and Toy Terriers  being referred to as Manchester Terriers throughout the exhibition; and what a missed opportunity to celebrate the shared history of English Toy Terriers and Manchester Terriers, but frankly that does not diminish the sheer pleasure of this exhibition.   The truth is that Manchesters and ETT’s both descend from the same gene pool (with a fair level of transfer between the populations still happening today much to the chagrin of breed purists) and this exhibition includes many many beautiful examples of art featuring early “English Toy Terriers”.

If you can (and there must be very few  valid excuses for a real enthusiast) buy a last minute travel ticket and make the journey to London to see this exhibition and then spend some time in the wonderful treasure trove of history that is the Kennel Club Library.  See with your own eyes the 1850’s oil painting of five and a half pound “Tiny the Wonder” at work in the rat pit at the Blue Anchor Tavern; and another just a few years later, of one of the first “dog shows” held at the Queens Head Tavern after rat baiting was banned.

Here is the history of our elegant breed, in the bloody drinking and gambling activities of London taverns, and in the more genteel portraits of Gentlemen and Ladies with their beloved companions.  Ours is not a breed contrived for the show ring, born of a few founders and now suffering from poor conformation or genetic ill health.   Black and Tans are a proud part of our British heritage, for whom the show ring was created, and who remain largely unaltered in appearance and character since their earliest days.